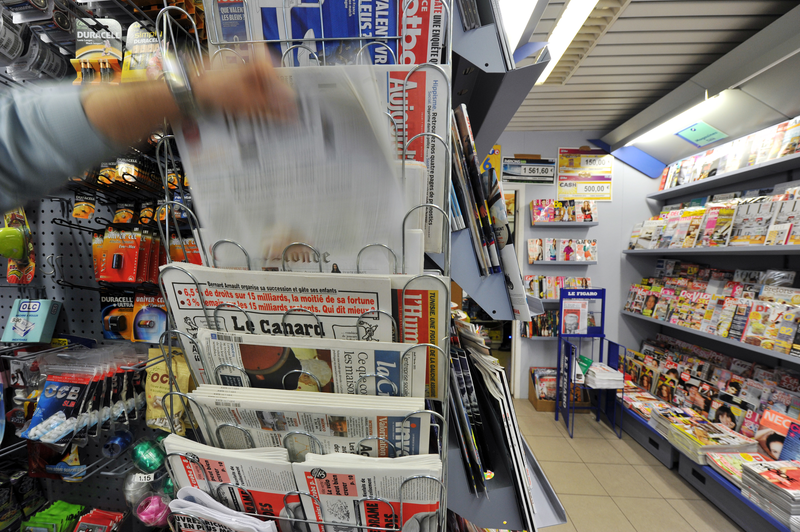 I still buy a newspaper every day. I’m the vinyl record collector of the news world: I like the crackle. I also like my daily chats with Patrick, my local kiosquier, who still can’t resist commenting on my accent as he hands me my International New York Times.

Patrick is almost part of the family. He always has a petite madeleine ready for my little boy, who thinks Patrick sleeps in the kiosk at night. In fact a whole legend has grown up around that kiosk, which I’ve convinced my son has an extensive basement with many rooms and spa facilities.

Unlike the magic kiosk, my newspaper isn’t infinite. It’s a silo, with a beginning and an end, which usually arrives just around the time I finish my morning coffee. But newspaper readers are a dying breed, we’re told, and newspapers are dying with us.

Or maybe they’re just adapting. The other day I was chatting to Mark Porter, the English art director and newspaper designer who recently revamped L’Express. Before starting his own design firm, Mark Porter Associates, he was the creative director of The Guardian, where he oversaw its award-winning redesign.

Mark told me he hadn’t yet worked on the website of L’Express, but he always keeps digital top of mind during any design project. He thinks not in terms of newspapers or magazines, but media brands. He told me: “One of the things about designing a magazine now, as opposed to 15 or even 10 years ago, is that it’s not enough to just have a logo that works on the front page of the magazine – you need a logo that can work in other contexts: on the web, social media and so on.”

Inside the magazine, he tries to create “typographic conventions that are recognisable wherever they appear, so you get a feel for the brand in other contexts.”

Another of Mark’s projects is the launch of an online newspaper called El Nacional in Barcelona. “This being 2016, when you launch a new newspaper you don’t do it in print, you do it on the web,” he commented.

But not always. In the UK recently, a truly disruptive element arrived on the media scene. It’s called The New Day, and it’s a newspaper. Just that. No app. No website. (Although it is on Facebook and Twitter.) Published by Trinity Mirror, The New Day is designed for readers who are tired of information overload and simply want to read a well-curated tour through the news. It’s supposedly aimed at a female audience – its editor is a woman, Alison Phillips – but actually it’s fairly gender neutral. It’s also upbeat and optimistic: its slogan is “Life is short, so live it well.”

This reminds me of a conversation I had a few years ago with Kevin Roberts, then worldwide CEO of Saatchi & Saatchi. We talked about how newspapers could become “lovemarks” (his word for brands that consumers adore “beyond reason”). “They need to get some optimism,” he said.

I can sympathise with that approach. Although I remain addicted “beyond reason” to my New York Times, reading it is a fairly depressing experience these days. By the time I’ve put it down, I usually want to lock Donald Trump and ISIS in a cage somewhere and let them fight it out.

Phillips says The New Day takes only half an hour to read, and we won’t emerge from the experience feeling as though the world is falling apart. Her main qualification for editing the paper, she told The Guardian, is that she is “normal” – a 40-something mother, she is essentially her target reader.

But Phillips is being modest. She’s actually trying something quite risky. In fact, one of her inspirations was a book called The Innovator’s Dilemma, by Clayton Christensen. It’s about the difficulty of breaking established patterns. The New Day breaks at least two of them: the old assumption that newspapers need to be brash and politically-driven; and the new one that media brands need to be hyper-reactive and digital first.

The result is a newspaper that’s as neat, colourful and comforting as an English garden on a spring morning. It’s more like a hybrid between a magazine and a paper.

There is absolutely no guarantee that The New Day has a sunny future. Its owners are hoping for an ultimate daily circulation of 200,000 – fairly low in the UK, where The Sun still sells 1.7 million copies a day – but recent reports say it is struggling to reach even half that.

Personally I think there’s still room in the world for an analogue newspaper, but perhaps with a different target audience in mind. Maybe millennials would find it cool to read a well-crafted, trendy, somewhat intellectual journal that feels retro and tactile. In other words, the news equivalent of vinyl.