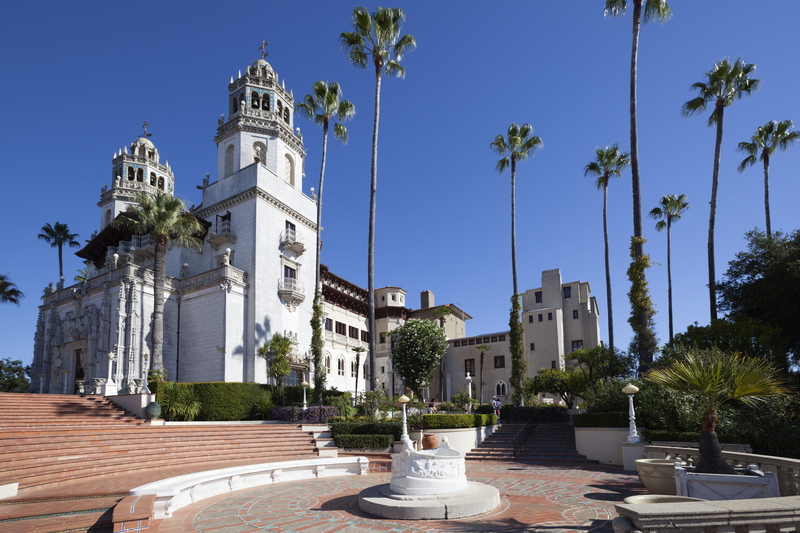 When I go to unfamiliar cities, I often buy the local newspaper – even if I can barely understand it – just to feel part of the scene and dip a toe into the local culture. So on my recent visit to San Francisco it was easy to grab a copy of the San Francisco Chronicle and read about the city’s housing issues over a cinnamon roll and a mug of coffee.

But soon it was time to take Route One along the coast, watching waves barrel against the rocks and stopping to look wide-eyed at seal colonies. At Big Sur, we ate at Nepenthe, which must be one of the most beautiful restaurants in the world: a wooden structure set among trees and overlooking the glittering sea.

Then we arrived at Hearst Castle. It’s not a real castle, of course – no cannons or fortifications – more of a giant villa. But it is perched grandly on a hill and it still crackles with power. It was built by the press tycoon William Randolph Hearst, who started it in 1919 and continued tinkering with it almost to the end of his life, in 1951.

What’s striking about the castle is how recent it feels. When you visit the castles of England or the châteaux of France, they feel impossibly distant in time, as if they were built by an alien race. But as you tour the rooms and halls of the Hearst residence, it’s as if he has only just left. Or perhaps popped out to stroll the grounds.

It’s partly because the company he created still exists. The Hearst media conglomerate owns Cosmopolitan and Harper’s Bazaar, the sports network ESPN and more than 50 newspapers, including (you guessed it) the San Francisco Chronicle.

And here’s where I have a problem with Hearst Castle: its vast, Greco-Roman swimming pool, its Spanish renaissance paintings and gilded ceilings. Because it was all built on the hard work of people like me.

Sure, Hearst was rich before he even started on the castle. His father had come to California during the 19th century gold rush – and struck silver instead. He won a newspaper as part of a gambling debt. This he later passed on to his son.

William Randolph turned out to be a press genius, acquiring a string of newspapers and boosting their circulation with a blend of tabloid gossip, satirical cartoons and energetic journalism. He transformed notions of what a newspaper should be, blowing his sombre and pompous rivals out of the water.

Hearst Castle is a monument to his success: a castle built of paper. Orson Welles famously used Hearst as the basis for the titular character of Citizen Kane. But while Kane sits lonely and haunted in his deserted chateau, Hearst seems to have been an ebullient and sociable character.

He would fly Hollywood stars and socialites to his castle for the weekend. Once he’d finished reading every newspaper he owned – which took all morning – he’d watch over them as they swam and played tennis and fed animals in his private zoo. In the evening they all dined at one long table. On your first night, you might have been sitting next to Hearst himself. As the nights progressed, your place would move further and further down the table. When you reached the end, it was time to leave.

I wonder how many ordinary, working journalists Hearst invited to his castle? I’ve always been conscious that, as a writer, my words mostly make other people rich. Few journalists will ever be as wealthy as the people who own their publications.

But I’m not complaining. I’ve been working in the media since the age of 19, and I knew the deal going in. For me, becoming a reporter was a passport to a life well-lived. It would allow me to meet fascinating people, have a few adventures, see foreign lands. And it didn’t disappoint. I don’t own a castle, but I never expected to.

I often tell people that journalism will never make you rich in financial terms, but it will make you rich in experience. You can keep your swimming pool: thanks to journalism I interviewed admen in New York, fashion designers in Paris and the Dalai Lama in a hotel suite in Venice. Among other things.

Hearst may have been happier than Kane, but I’m happy too, even without the sprawling villa. Sometimes I wonder if I’ll encourage my son to become a journalist, if he seems that way inclined. I feel about it much the same way Churchill felt about democracy: it’s the worst possible choice, apart from all the others.